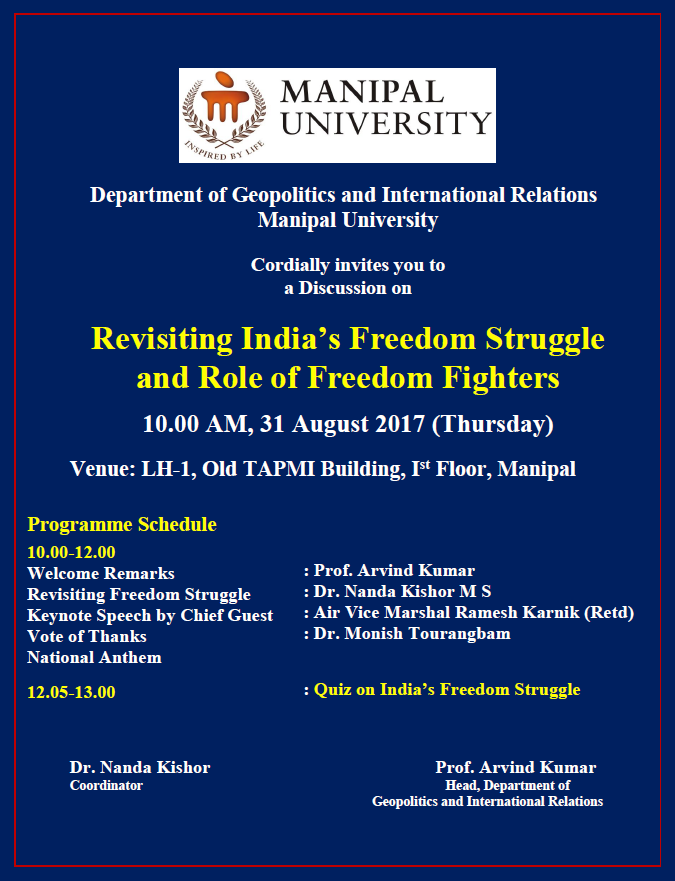 The Department of Geopolitics and International Relations, Manipal Academy of Higher Education organised a special lecture on “Revisiting India's Freedom Struggle and Role of Freedom Fighters” with a focus on the rationale behind Quit India Movement leading to India’s independence. India has been celebrating 75th anniversary of Quit India Movement with a great zeal and fervour. The esteemed guest invited for the lecture was Air Vice Marshal K R Karnik. He pointed out the circumstances under which India had to go for partition and emphasised on the role played by Jawaharlal Nehru, Md. Ali Jinnah, M K Gandhi and Maulana Abul Kalam Azad. He highlighted how Maulana Abul Kalam Azad had an alternate vision of partition. He was highly vocal against India’s partition and had predicted the disturbances which were caused leading to greater instability and division within Indian society.

Dr. Nanda Kishor of Department of Geopolitics and International Relations highlighted how each of the Congress sessions had a specific declaration in terms of fighting against British rule and also highlighted how a number of political parties established including Muslim League, Communist Party of India and more importantly from the very beginning the Indian National Congress undoubtedly contributed to India’s freedom. The understanding of the various issues dealing with Indian national movement is very important for Indian citizens. He also emphasised on the repercussion of Quit India Movement for British Raj and in what ways Viceroy Linlithgow wanted to defeat the purpose of Quit India Movement. The challenges posed by Cabinet Mission, Simon Commission, Cripps Mission and ultimately to Indian Independence Act of 1947 were also discussed.

Prof. Arvind Kumar welcomed the gathering and highlighted the importance of the national movement and its relevance for the present generation. Dr. Monish Tourangbam proposed a vote of thanks to the Chief Guest and to the audience. The Department of Geopolitics and International Relations, Manipal Academy of Higher Education felicitated and honoured AVM K R Karnik for his contributions to the nation.