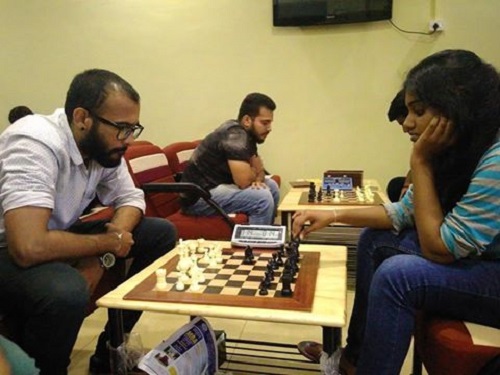 The inter class chess competition was held on the 26th and 27th of August. The event started at 5:00 PM on 26th august with a total of 16 contestants taking part in the competition. 4 Chess boards where provided and the contestants were split into 4 groups who were made to play simultaneously. Every contestant was given 15 minutes to make their moves. The result was decided either by the timer or by Checkmate. All the matches were knockout matches and the looser had to go out of the tournament. The tournament was a tough one with all the contestants putting out their best skills. First day ended with 4 participants who qualified for Semi-finals.
The top four qualified players gave their best to win the game. The tension in the game kept increasing as the day went on. Finally, after a tough competition, the results were known with Ms. Sushmita Rao (1st year A Section) securing the first place and Mr. Chetan J (2nd year A section) securing the second place.
This event was organized by the Sports & Athletics Club, School of Management