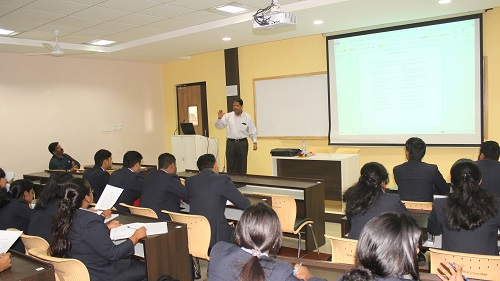 Mr. Nishith Mohanty, CHRO, MEMG delivered a Guest Lecture on Interpersonal Relations at School of Management, Manipal Academy of Higher Education, Manipal on December 15, 2015, for the students of HR specialization. He spoke about ‘social style grid’ and conducted an exercise wherein which the students understood where they fall in the grid, i.e. Expressive, Drivers, Analytical and Amiable. Through this exercise he made aware the students what is the essentiality of every part of the grid and its characteristics, usefulness and drawbacks. He gave a valuable suggestion that this class of exercises could be best conducted in B-Schools and should be done in the initial period of the course. As a part of his concluding words, he made a mention of skills and competencies, which according to him, converge at a point as one climbs the corporate ladder and from this mid-point onwards emphasis should be more on competencies in order take up higher leadership roles.