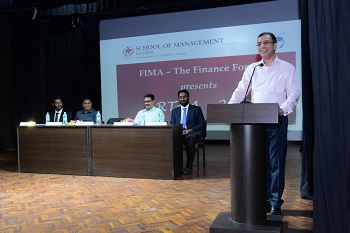 The annual finance conclave of Manipal Institute of Management was conducted on 23 February, 2019. The Finance club of Manipal Institute of Management organized the conclave. The conclave had the privilege of the presence of two luminaries of the world of economics and finance, who belong to the Indian corporate world. The chief guest of the conclave, Mr. M.R. Venkatesh, is a prominent advocate of the country. He has represented Dr. Subramanian Swamy in the high profile national Herald case. He is an author of several books on various issues of the economics and finance. Further, he is a prominent public intellectual whose opinions are keenly heard by people. He is frequently interviewed on the PGurus Channel on YouTube.
Speaking on the occasion of the Finance conclave, Dr. M.R. Venkatesh opined that this century is going to be the century of India. He attributed this inference to two reasons. First, he argued from the point of view of the volatility that might be caused in an economy due to the possible imbalance in any of the four aspects of macro-economic level i.e. production, consumption, savings, and investment. According to him, India is the only economy in the world that has self-sustainability in all these four aspects. Therefore, he argued, India has the resilience to face the economic shocks that emanate from the Western world. Second, the Western world in particular, and the other world economies in general, do not have similar degree of resilience as they are all good in one or two macro-economic factors mentioned above, but not self-sufficient in all the four pillars of macro-economics. Therefore, he was of the view that India would shine in the years to come.
The conclave was presided over by Mr. Rajesh Moorti, the CFO of Manipal Education and Medical Group, Bengaluru. He shared his insights on “Leveraging ethical behavior for attaining corporate success.” During the course of his talk, he shared his personal experiences on how unethical behavior at workplace would push the people involved in such behaviors into perennial problems. He interacted with students on issues such as the most required values at workplace, the possible reasons as to why ethical behavior might lead to corporate success etc. Drawing from his wide corporate experience, he deliberated on the reasons for the fall of corporate giants such as Enron and Satyam. He was also of the opinion that we are living in exciting times. In this connection, he explained an interesting concept of ‘ovarian luxury’ and, in the light of the implications of ‘ovarian luxury,’ argued why India is going to thrive in the decades to come.
After the conclusion of the speeches of both the eminent guests, there was a panel discussion on the current issues of the world of finance. The office-bearers of the Finance club, Mr. Gautham and Ms. Rajeshwari moderated the panel discussion.
Prof. Nandan Prabhu welcomed the gathering. Mr. Vyshak Vinod, the President of the Finance club, presented an overview of the activities of the Finance club for the academic year, 2018-2019. Prof. Ranjit V.K. proposed vote of thanks. Ms. Anvitha compered the program.