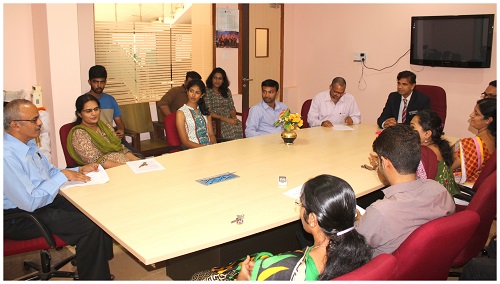 School of Management, Manipal Academy of Higher Education observed Constitutions Day on 26th Nov 2015 to commemorate the adoption of the constitution in 1949, which marked the beginning of a new era in the history of India. The celebrations were held as a tribute to Dr. Ambedkar, who played a seminal role in the framing of the Indian Constitution as the Chairman of the Drafting Committee of Constituent Assembly.
Prof. Suhan Mendon, recited the Preamble of Indian Constitution which records the aims and aspirations of the people of India and reflects the basic spirit of the Constitution. Dr. Raveenranath Nayak, Director, School of Management (SOM) unveiled the book ‘Annihilation of Caste’ written by Dr. B R Ambedkar. Unveiling the book Dr. Nayak, shared his anguish over "hidden apartheid," the caste based discrimination which is a sad reality practiced even in the modern society. “The name may have been banned but pervasive negative attitudes of mind remain, as do the extreme levels of abuse and servitude experienced by Dalit community.” said the Director. “Though the Constitution serves as a powerful emancipation proclamation ending centuries of caste-based discrimination and social exclusion, it is sad to see that our mindset has not evolved considerably.” He urged for a change in mindset, and called for practicing the principles of egalitarian society envisioned by the philosophers like Basavanna, Dr. Ambedkar and Mahatma Gandhi.
Prof. Nandan Prabhu enlightened the audience about the philosophy and life of Dr. B.R Ambedkar. In his edifying speech Prof. Prabhu spoke about the background of the book ‘Annihilations of Caste’ and the process of drafting the constitution. He also spoke about the French principles of ‘Liberty, equality and fraternity’ and its profound impact on the founding principles of Indian Constitution. He said that Dr. Ambedkar continues to be a tall figure for both Leftist and rightist ideologist in India as his philosophy cuts though both these apparently contrasting ideologies. Prof. Prabhu remarked that if India was once unified by Sardar Patel, India continues to be unified because of the profound principles laid down by the architects of Indian constitution.
Dr. Yogesh Pai P, Associate Professor, SOM welcomed the gathering and introduced audience about the significance of the day. Students and Faculty participated in the meeting.