The program started with the inauguration at 9:30 am. Ms.Sushma Belinda Rodrigues, 2nd year MSc (N) student was the Master of Ceremony for the inaugural program. The program started with the prayer song by Mrs.Loretta Veena D’Silva. Dr.Melita Sheilini, Asst.Professor-Selection Grade, Manipal College of Nursing, MAHE, Manipal welcomed the gathering and briefed about the program. Chief Guest, Lion Ramesh K Shetty, President,  Lions Club Udupi Lakshya spoke about the importance of World Diabetes Day. Dr. Jyothi Chakrabarty, Professor, and HoD, Medical-Surgical Nursing department presided over the function along with Mrs.Kavana Raviraj, Secretary, Lions Club, Udupi Lakshya, and Mrs. Chandrika, President, Association of Ex-students of Machikodi School. The inaugural program was concluded with a vote of thanks by Mrs.Loretta. The 1st year and 2nd year MSc Nursing – Medical Surgical Nursing specialty students were part of the program. The participants were the residents of Manchikodi.

After the initial check of Height, Weight, and BMI, the participants were guided to the counter where their blood pressure and Random Blood Sugar were checked. A total of 43 people were screened. Out of them, five were found to be having elevated Random Blood Sugar (RBS) and one out of them was newly detected. Eight people had their Blood Pressure (BP) elevated and out of them 7 were on antihypertensive drugs and one was newly detected. Every participant was given the Health Check Cards with their brief identity and the screening details. All who came for health checks were given awareness on Diabetes Mellitus focusing on the risk factors, clinical manifestations, complications, and management including lifestyle modifications, foot care, and those who were known diabetics and hypertensives were told about the importance of medication adherence. All were distributed an apple and the children who accompanied their parents were given chocolates as a kind gesture from our end. Those who were newly identified to have high BP and elevated RBS were emphasized to go for further checkups.

The programme came to an end at 1:00 pm. Overall the program was coordinated by Dr.Melita Sheilini along with Dr.Daisy Josephine Lobo, Associate Professor, Mrs. Janet Prameela D’Souza, Assistant Professor and Mr.Raghavendra, Lecturer from Medical Surgical Nursing department, MCON, MAHE, Manipal under the guidance of Dr.Jyothi Chakrabarty. 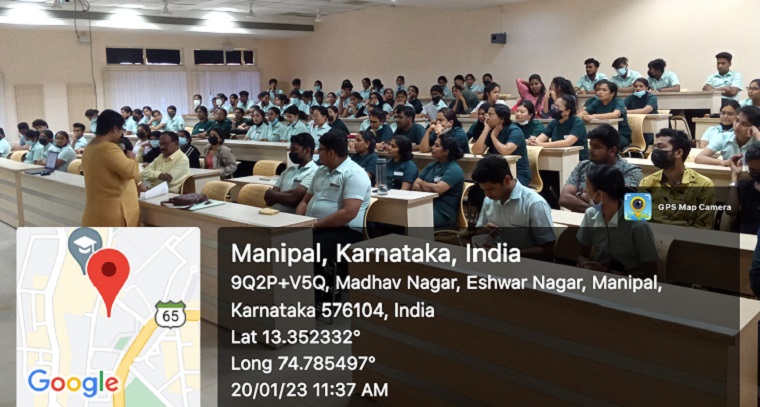